My last week in Australia started with an early flight from Gold Coast to Sydney. I was met by a smiling cousin Jan — once we found each other in the pick-up parking maze.  This was her first week as a retiree from her decades at a full-time job.  Like many of us who find that retirement is also a full time job and sometimes more demanding than the job with the pay check, Jan will be busy. We started off by visiting with a couple of her adult sons and a grandson, and strolling down to the local Balmoral Beach with them.

After a long wait for take-away we returned to Jan’s car up a very long, steep hill.  She heard that I liked to walk, and walk we did!  It also happened to be one of the hotter days so we needed to pause now and then. Back at Fergus’ apartment the three of them got busy with their mobile phones trying to find tickets to a performance at the Opera House. Nearly everything was booked for the days I had left. What a team effort!  We had no idea what we ended up with, just happy to find anything.

The next morning Jan and I drove up to Killdare Beach in the Central Coast area north of Sydney. Her cousin, Wendy, lives nearby and she and her husband Colin and their dog Poco were waiting for us at the Surfers’ Club Cafe on the beach, along with an old time jazz band which played until noon. 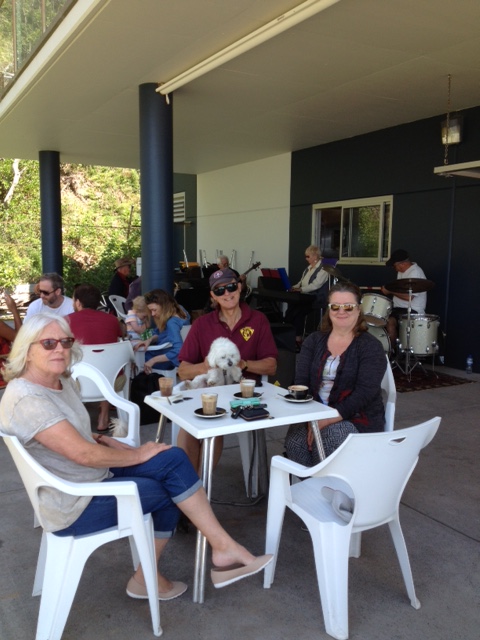 Wendy, Jan and I also took a short hike to an overlook of Hardy Bay, the local harbour. 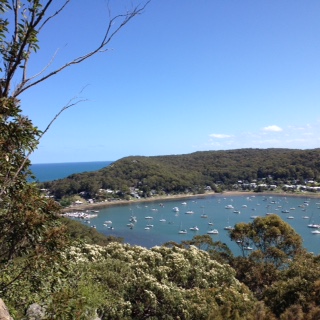 The following day Jan and I visited the Maritime Museum at Darling Harbour in Sydney. We toured a replica of Captain Cook’s ship, the Endeavour, as well as a famous destroyer, the Vampire, complete with canons and guns, and finally the freighter James Craig.

We also climbed to the top of an old lighthouse re-located from Bowling Green.  We then met with Anthea, a visiting friend of Jan’s, for lunch on the wharf. Our order came very late (they actually forgot about us) so we were given complimentary drinks and an extra dish of food (calamari) to share. Jan and I managed to return to her home on the train without falling asleep and missing our stop (all that fresh air, climbing up and down the lighthouse and ships on a warm day followed by 2 drinks). We took a nap, then prepared dinner for Jan’s family, a weekly affair apparently. That day her sons Robert and Tom and Tom’s wife Sharon came over, so now I’ve met the entire brood.

The next day Jan and I drove into the Blue Mountains to view the Three Sisters rock formation and hike along the top of an escarpment to a water fall. 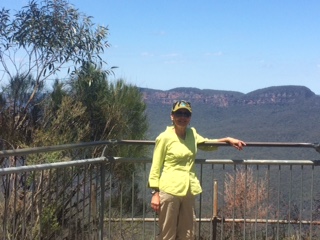 We dined at the Boiler House Restaurant next to the Hydro Majestic Hotel, some of which was roped off for a movie set.  But which movie??  We finished our day with a short hike at Govett’s Leap before returning to Jan’s home in Beecroft.

My final day in Australia was a full on cultural experience. We began by taking the train to the heart of Sydney and the Shangri La Hotel, where Jan made New Year’s Eve reservations for some of her local and Canadian family.  While waiting for the paperwork we indulged in coffee and a fancy melt-in-your-mouth chocolate-covered mousse roll. 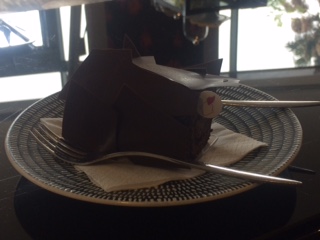 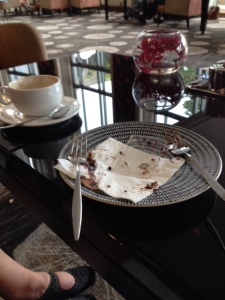 Before and after cake…….

Reinforced with caffeine and chocolate, we strolled over to the Royal Botanic Gardens and were suitably impressed with the huge and varied ferns, flowers and especially the Moreton Bay Fig tree.

We toured the Museum of Art en route to the Sydney Opera House. The display of aboriginal paintings appealed to my colour senses. An appetizer for the play we were to watch after dinner at the Opera House Cafe.

The one hour performance called Chrysalis was produced by a new theatre company that includes disabled, including non-verbal, actors.  Impressive!

I was not as sad as I thought I might be, leaving this beautiful, highly diverse country, in many ways not so different from Canada.  I was not sad to say goodbye to a number of wonderful new friends (and relatives) because I knew I would have to return.  This was a sampler tour.  I’ll be back for the main course!