Kira has been drawn to the sea for as long as she can remember. But this is the one place her parents have forbidden her to go, even though her father is a fisherman and their house overlooks the harbour.

Frustrated at having to follow the rules, Kira sets out to prove that there is nothing to be afraid of. What she learns comes as a shock, driving her to uncover the secret her parents have kept since adopting her as a baby. With the help of her friend Cody, Kira begins to unravel the truth—and meets some of the unsavoury characters who call the sea their home. Torn between loyalty to her adoptive parents and the search for her original family, Kira has tough decisions to make. But is she ready?

Kira’s Secret was launched in the fall of 2013.  In 2014 it was selected as one of the books for PEI’s celebration of the meetings of the Fathers of Confederation which preceded confederation itself.  The program, 14 Books, 1 Island, had 14 PEI authors reading from their books across the island from spring through fall. In 2015 Kira’s Secret was one of 10 Maritime books nominated for the Hackmatack Children’s Choice award to be presented in April 2016.

At the launch we were able to video-conference with Kira Dawydiak, the girl who inspired the story that became a book. The real Kira lives in Vancouver, and some years ago during a visit with Kira and her family, her mother shared her concerns that Kira was not a keen reader or writer in school.  So her aunt Orysia asked Kira if she would like to participate in writing a story together. Kira suggested a theme, named a few characters and then let her aunt do all the typing. But the story grew, and grew and like that snowball rolling down a sticky-soft-snowy hill, it became a monster-sized ball of ice, twigs, rabbits, goats, small children on their toboggans and something altogether different from the small ball at the top. Well, not completely different, but eventually that story grew into two books at least.  The ball is still rolling, I hear, possibly toward the sea, where another metamorphosis is possible. With stories like this, one never knows where or when they will stop rolling……

PS. Kira has become an avid reader, and writer, and a fine little actor to boot. I don’t think aunt Orysia had much to do with it really, but her fate might be lurking in the genes all the same.

Kira loves her adoptive parents but she chafes under their strict rules. She finds it especially frustrating that she is forbidden to ever go to the seashore. Her longing to venture to the sea and explore the local tide pools only increases when she makes a friend who shares her keen interest in ocean life. The two begin researching the folklore and legends of the sea and its inhabitants, and before long Kira makes an amazing discovery about herself. As she and Cody plan several outings to test their theories, Kira becomes determined to learn the truth about her origins and the family she has never known.

Dawydiak’s simply written tale will capture the imagination of young readers who are drawn to the myths and legends of the sea. Like Kira and Cody, they will revel in the descriptions of the selkies, merrows and finfolk and their fantastical underwater realm. But the author also tantalizes readers with a hint of a more sinister aspect to this alternate world. While Kira’s background may not come as a huge surprise, there are a few unexpected revelations—and questions are raised which suggest that a sequel might be forthcoming. 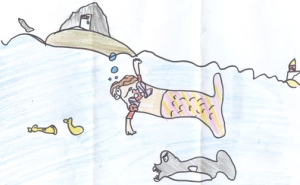 Here’s an illustration by my cousin Noah Rioux when he was eight years old.